The AFL and the Gold Coast Suns have apologised to former player Joel Wilkinson for an incident of racism.

The incident happened at a 2013 Wacky Wednesday event, where two of Wilkinson’s teammates dressed in blackface.

The Herald-Sun published photos of players Alex Sexton and Leigh Osborne wearing blackface at the end of season celebration.

Wilkinson said he felt “mortified” when he saw Osborne on the day, and furthermore, claimed that he “tried to stop it during the event”.

The incident formed part of a racism and sexual harassment complaint Wilkinson filed in the Human Rights Commission against the Suns and the AFL.

As a result of the complaint, and subsequent media attention, the Suns released a statement:

“The Gold Coast Suns acknowledge that Joel Wilkinson experienced racism during his AFL career with the club including two well-publicised on-field incidents.

“We deeply regret that he did.

“The photo released to media is from an end-of-season player dress-up event that occurred in 2013.

“The Suns view the choice of outfits in the photo and on that day to be inappropriate, unacceptable and regrettable.” 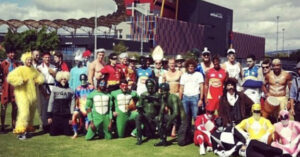 Osborne and Sexton have also separately apologised for the incident.

In a statement, Osborne said he didn’t realise the hurt he caused Wilkinson at the time, and later personally apologised to him.

“When I attended the 2013 Mad Monday-type event dressed as Joel I did so with the loan of his jumper and with his agreement after I had asked him whether it was OK to dress up as him.

“Joel never raised any issue about it with me on the day.

“The first time I became aware that Joel was upset about what I did was when I found out about his complaint to the Human Rights Commission years later in 2018.

“As soon as I found out about it, I contacted him and apologised to him for my actions and said I was sorry for what I had done in 2013.

“I never meant to hurt or ridicule him but looking back now I understand it was wrong.”

The Suns said Sexton has also apologised for his conduct on the day.

The AFL also released a statement apologising for the blackface incident, and also acknowledging the impact racism had on Wilkinson.

“The AFL is clear that any use of blackface is never acceptable in any forum or at any time.

“While the AFL was not aware of the 2013 end-of-season blackface incident until 2018 shortly before Joel detailed the incident in his complaint to the Human Rights Commission, one thing that is clear is that the behaviour is wrong and is behaviour that we would never accept or condone.

“Again, we understand the impact this has had on Joel.

“We are sorry that it happened, and it shouldn’t have.”

Can you be sacked for expressing a political opinion? The short answer is - it…