The owners of Barry Café in Melbourne have blamed Google for underpaying their workers.

The café has admitted underpaying staff and not providing legal break times.

However, they say they researched information about their workplace obligations from Google.

The campaign involved a noisy protest outside the venue which attracted widespread media coverage.

Anne Petroulias said that Barry is the first café she and her brother Steve owned.

She claims they had been told it was lawful to trade weekend penalty rates for staff meals, however, it is not.

“We had no idea about wage rates or anything,” she said.

“My brother looked on Google, and got the wage rates.

“I know we did wrong and we want to rectify anything.”

It is unlawful to pay wages in anything other than money.

As a result of the wage theft, angry staff and members of the United Voice Union this week protested outside Barry Café.

They claim the employer underpaid them with below award rates, in addition to failing to pay penalty rates and overtime.

Furthermore, management refused shifts to staff who complained about their illegal working conditions.

This adverse action is a breach of a worker’s general protections.

Petroulias said the café has lost customers as a result of the wide negative publicity.

“The value of our business has really gone to zero.

“We paid a lot of money to come here a year and a half ago and it’s all borrowed money.

“We are going to lose our house because of that.  And we don’t know what to do.  It’s really difficult for us.”

Petroulias and her brother promised to pay back the outstanding wages and assured staff that breaks will now be half an hour instead of 15-minutes. 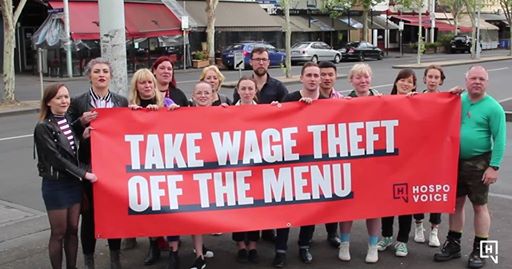 Workers and union supporters at the Barry Cafe protest.

“If you can’t afford to pay your staff legal entitlements, and if you don’t know your workplace obligations, then you shouldn’t be in business,” he said.

“It shouldn’t take a public name and shame campaign to make employers do the right thing.”

“Arguing that you tried to just Google the information is a pathetic cop-out quite frankly,” he said.

In yet another twist to the Barry Café saga, Steve Petroulias has threatened to sue staff who continue to protest.

The Fair Work Ombudsman confirmed it is investigating the underpayments.

A Bribie Island sushi restaurant operator has been penalised $80,000 for ignoring orders to reimburse…

Retail manager Thomas Ruscoe-Jones had $261,000 in wages stolen over 11 years. The staggering wage…