A Burger Boss outlet is facing court for allegedly ripping off a young worker.

The Fair Work Ombudsman accuses the burger outlet, and its operator, of failing to comply with a Compliance Notice.

The Notice required the employer to calculate the wage theft and then back-pay the worker.

Shane Dharmatilake used to operate the Burger Boss outlet in Pakenham in Melbourne’s south-east before it closed in 2020.

He is facing the Federal Circuit and Family Court, along with his company Benny842 Pty Ltd.

Fair Work accuses him of underpaying a 20 year-old food and beverage attendant between June and October 2020.

It is alleged Dharmatilake failed to pay the young man the minimum wage rate, overtime rates in addition to penalty rates for weekend and public holiday work.

Fair Work started investigating Burger Boss as a result of receiving a wage theft complaint from the worker.

An inspector formed a belief Dharmatilake had breached workplace laws by failing to pay proper wages and entitlements under the Restaurant Industry Award 2020 and the Fair Work Act.

They then issued him with a Compliance Notice requiring him to calculate the underpayments and back-pay the worker in full.

Fair Work alleges he subsequently failed to do so.

“The industry employs a lot of young workers who might not be aware of their workplace rights, or might be scared to speak up,” he said.

“That’s what makes them particularly vulnerable to exploitation.”

“Compliance Notices are a chance to rectify wage theft without financial penalty,” he said.

“Employers who choose to ignore them will end up in court and out of pocket.

“Not only will the court order them to back-pay what they owe, it will also impose a penalty for breaching workplace laws.” 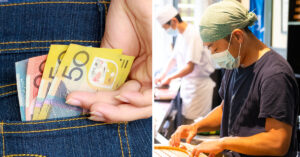 Fair Work is seeking penalties against Dharmatilake and his company.

The regulator is also seeking an order for the company to rectify the alleged wage theft, in addition to paying interest and superannuation.

The Federal Circuit and Family Court in Melbourne has a directions hearing listed on 25 July 2022.