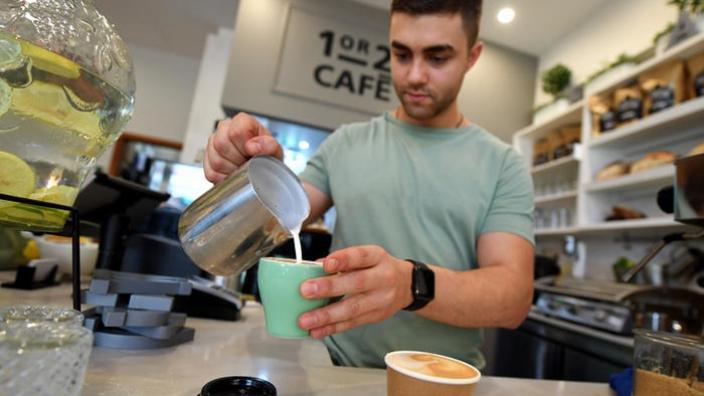 Customers are being hit with a public holiday surcharge at cafes and restaurants. despite recent cuts to penalty rates.

From July 2017, hospitality workers had their weekend and public holiday penalty rates slashed by 15 percent.

Despite this, cafes and restaurants still charged customers a 10 to 15 percent surcharge on Easter Monday.

The Fair Work Commission announced the first round of penalty rate cuts of 5 percent in July 2017.

A year later, hospitality workers had their weekend and public holiday penalty rates reduced by a further 10 percent.

In total, hospitality workers had their penalties reduced by a total of 15 percent as a result.

Coincidently, this is the same rate many outlets charged their customers today in the form of a surcharge.

The Commission and business groups argued at the time that the cuts will create jobs and create economic growth.

However, neither has happened as a result of the cuts.

In fact, research shows that since the first cuts in 2017, thousands of full-time jobs have been lost in the retail and hospitality sectors.

According to the Australian Bureau of Statistics, 50,000 full-time jobs have gone in retail.

Predictably, the Australian Industry Group argued that “it is not surprising that many businesses still charge public holiday surcharges” because they are still paying penalty rates.

Australian Chamber of Commerce and Industry CEO James Pearson told Nine that the surcharge is still in place because the penalty rate cuts are phasing in over four years.

“We are only half way through that and penalty rates are still significantly higher on public holidays than on other days of the week,” he said. Industrial advocate Miles Heffernan scoffed at that argument, saying cafes and restaurants are conning their customers.

“They’re paying 15 percent less in penalties, but are continuing to charge customers a 15 percent surcharge – you do the math.

“No one should believe the nonsense spun by business groups that cuts to penalty rates create jobs and grow the economy.

“There is no evidence to support such claims.”

Bill Shorten’s Labor Party has pledged to reverse the penalty rate cuts if elected in May.