A former Coffee Club franchise is taking the company to court claiming it set him up to fail.

He’s claiming the situation forced him to close the business because of high rents and refurbishment costs.

Swift told The Courier-Mail that he is taking his case to the Federal Court.

He is alleging The Coffee Club breached the Franchising Code, in addition to misleading and deceptive conduct.

“I just do not want this to happen to any other small business person.

“I have a wife and two daughters but have been financially ruined.

“I have had to sell our house to keep the business going but have now walked away.”

Swift said he ended up paying 19 percent of his turnover in rent.

The Coffee Club agreed that to make a profit, rent had to be no more than 14 percent.

“I have sent numerous emails over the years to Coffee Club regarding the need for rental relief but this has fallen on deaf ears,” Swift said.

Swift also accused The Coffee Club of attempting to enforce over-inflated refurbishment costs on the business through the use of its own contractors.

And to make matters worse, the company opened another outlet in the same shopping centre eight years ago which Swift claims severely impacted his turnover. 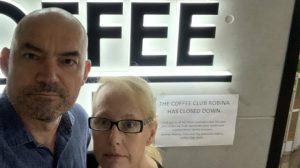 Jeremy Swift and his wife Sharon.

In a statement it said the rent represented fair market value.

“Given the turnover of The Coffee Club Robina at the time of the lease renewal, the landlord QIC would not have agreed to a rent discount,” it said.

The franchisor also denied opening a second store in the same centre had affected Swift’s sales.

Franchising has sent many people broke

“Sadly, there is an ever-growing list of people who have lost everything by having a go at franchising,” he said.

“Certainly, some brands are better than others, but it is a reminder to always seek expert advice before investing in a business and risking the lot.”

The Courier-Mail reports that in the past 14 months, more than half a dozen Coffee Clubs have closed.

All have failed to compete in a crowded market.

The former owner of a Cairns restaurant has been penalised $168,924 for ripping off a…