Budget airline Jetstar has been accused of using cheap foreign cabin crew on Australian domestic routes and paying them a base rate of as little as $100 a week.

Industrial advocates say the airline is using a loophole in the law to use cheap labour.

Airline says it has done nothing wrong

The allegations were made by the ABC’s 7.30 program, which revealed the airline had started using Thai-based crew on its Darwin-Adelaide route, which some staff believe could be illegal.

Jetstar maintains it is doing nothing wrong because migration regulations allow the use of foreign crews on international “tag” flights, which is when a domestic sector is added to an existing international flight.

Industrial advocate Miles Heffernan from Industrial Relations Claims said Jetstar might be using a loophole to get around the law.

“It sounds to me like they are exploiting the system to save a few bucks – all they have to say is the route is part of an international flight, and all of a sudden they can use cheap labour,” he said.

Mr Heffernan’s suspicions are supported by a Jetstar pilot who told the ABC that there was no way the Darwin-Adelaide return flights are international flights.

“All the passengers get on in Adelaide and get off in Darwin.  They use domestic terminals, domestic ticketing and domestic security checks,” the pilot said.

Thai-based cabin crew work on popular holiday routes to Bali and Thailand on shifts lasting up to 20 hours, and claim they struggle to feed themselves on the amount they are paid. 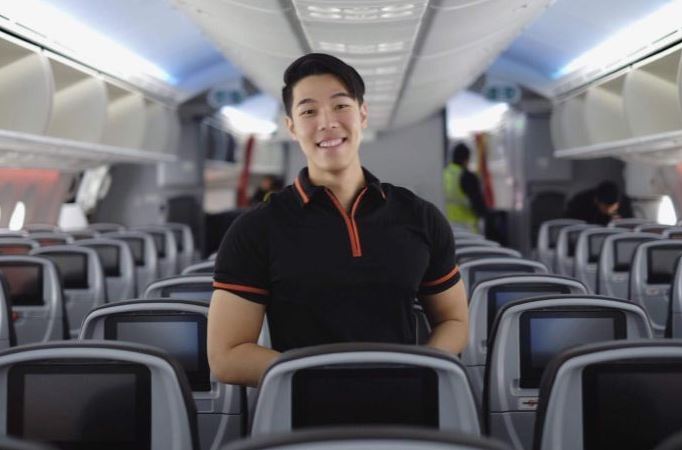 ‘We need a fair working place’

Pojchara Kosolchuenvijit quit the company two weeks ago, and told the ABC that the long work hours posed a risk to passenger safety.

“There are safety concerns because of the fatigue.  The crew should be fit at all times. It’s the crew that would help the passengers in an emergency,” he said.

The Thai-based cabin crew earn about $13 an hour when they are in the air, and also receive a travel allowance of $60 for every 36 hours they are away from home, compared to local crew who are paid $128 a night.

“I know it’s part of the business model to have cheap labour, but we are human and it’s 2018,” Mr Kosolchuenvijit said.

“We don’t need discrimination, we need a fair working place,  We need enough money to live.”

Jetstar refused to be interview by the ABC but in a statement said all employee arrangements complied with Australian law.

“Our Thai-based crew take home on average $2,600 a month, depending on seniority, which is five times the average monthly Thai salary,” the statement read.

Mr Heffernan pointed out that the Thai cabin crew have more expenses because they spend a lot of time away from home.

“That salary might be okay if they lived in Bangkok full-time, but the reality is these cabin crews spend a lot of time here in Australia where the cost of living is a lot higher,” he said.

“There is a cost to having cheap flights and running a successful budget airline, and it seems these Thai-based cabin crew are paying the price.”

Flight attendant in ‘a flood of tears’ over passenger sexual harassment

The former owner of a Cairns restaurant have been hit with a huge $168,924 penalty…

Almost two-thirds of audited businesses in western Sydney were found to be underpaying their workers,…