The daughter of a Gold Coast millionaire has been penalised $19,000 for ripping off young workers at her café.

The woman also ignored demands from the Fair Work Ombudsman to back-pay the workers.

Despite her family’s wealth, she claims she is “in a poor financial position”.

Fair Work inspectors commenced an investigation as a result of wage theft complaints from two of the workers.

As a result, inspectors issued Doumani with a Compliance Notice to back-pay the workers, which she subsequently ignored.

Fair Work then commenced legal action and, as a result, Doumani back-paid what she owed. 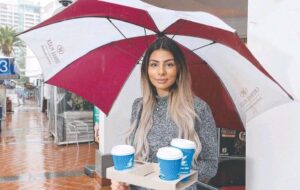 The Federal Circuit Court penalised Doumani $3,000 and her company an additional $16,000 as a result of the wage theft.

Judge Michael Jarrett said it is important to impose a penalty to deter others from similar conduct.

“Fixing a penalty in this case requires the Court to ensure that the relevant compliance notice regime established by the Fair Work Act is met and that the regime is an effective means of ensuring compliance with the Act.

“Employers and others who receive such notices should be under no misapprehension about what is required of them.”

“Compliance Notices give employers the chance to rectify underpayments without facing legal action,” he said.

“They are not optional.”