Yet another mining giant has admitted it failed to adequately respond to incidence of sexual harassment in its workforce.

West Australian mining contractor Macmahon Holdings told a parliamentary inquiry it failed to recognise the extent of the problem.

The state inquiry is investigating the extent of sexual harassment and sexual assault within the mining sector.

Former Macmahon employee Astacia Stevens detailed her experiences while working as a haul truck driver at a Fortescue Metals Group mine.

She said a superintendent intimidated and bullied her after she rejected his sexual advances.

She also said other male workers constantly followed back to her room.

Macmahon CEO Mick Finnegan declined to comment on the case, but described allegations made by former staff as “incredibly confronting”.

The company has received 11 sexual harassment complaints this year.

As a result, it sacked five workers.

“In hindsight, it clearly should have flagged a different response,” Finnegan said.

“At the time, we thought we were doing the work and getting the feedback … our leaders are able to get to sites and really get amongst the people, so we assume we’re on top of it and we were getting the real information through.

“But clearly, people were uncomfortable.” 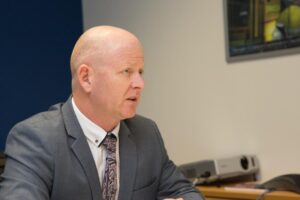 So far, the inquiry has heard damning evidence about the treatment of women at fly-in, fly-out mine sites across WA.

BHP, Rio Tinto and Fortescue confirmed they have investigated dozens of complaints at their sites.

However, the resources giants also acknowledged under-reporting is still a problem.

Macmahon plans to survey its workers on the reporting of sexual harassment in addition to improving training.

“Mining industry calls for scrapping of awards and agreements”