The mining industry is calling for the scrapping of awards and agreements so they can cut pay and hours of work during the coronavirus crisis.

Furthermore, they want temporary award changes to become permanent and a post-crisis summit to overhaul the industrial relations system.

Unions have slammed the proposals, describing them as “disgraceful”.

In a letter to Attorney-General Christian Porter, Australian Mines and Metals Association chief executive Steve Knott dramatically declared that a:

“tsunami of significant commercial impacts’’ is about to hit the resources and energy sector.

He suggests radical action is necessary to give employers the best chance to keep operating and save jobs.

Therefore, he’s calling for the suspension of awards and enterprise agreements until 30 September.

He argues the rigidity of awards and agreements significantly hamper the ability of businesses to respond to COVID-19.

Additionally, he describes relief delivered by the Fair Work Commission through recent award changes as “far too slow”.

Knott said suspension of awards and agreements for at least three months will deliver immediate relief from regulatory burdens.

“Ultimately seeing more Australians remain in their jobs, reduced reliance on the welfare system and swift economy recovery once this crisis is behind us.”

“That any employer organisation would write to the government seeking the power to unilaterally cut workers’ hours, suspend the minimum award conditions and be able to scrap workplace agreements would normally be unacceptable, but making such an opportunistic grab on working people’s rights during this crisis, when we are supposed to be working together in the national interest, is disgraceful.

“The Morrison government should rule out these ideologically extreme approaches and tell them to pull their heads in.” 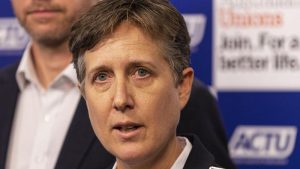 Government says now is not the time for changes

Attorney-General Christian Porter says it is “not the time for ambit claims for systemic or ideological changes to the IR system”.

Furthermore, he points to the recent agreement between employers and employees to change awards covering:

with further changes expected to more than 100 other awards.

Ministerial staff have accused Michaelia Cash of making them work 17-hour days, leading to a…