More than two million of Australia’s lowest paid workers have received a $40 a week pay rise.

The Fair Work Commission announced that the national minimum wage will increase to $812.60 a week, or $21.38 an hour.

The decision has been welcomed by the government and unions, however, business groups say the rise is too high.

Fair Work President Iain Ross announced the 5.2 percent increase to the minimum wage on Wednesday, the biggest since 2006.

Ross said exploding inflation was key to the Commission’s decision.

He said “present circumstances warrant an approach which gives a greater level of support to the lowest paid” while seeking to contain inflationary pressures.

“Headline inflation is now expected to peak at around 6 percent in the second half of this year, partly driven by higher petrol prices and sharp increases in the cost of new dwellings,” Ross said. 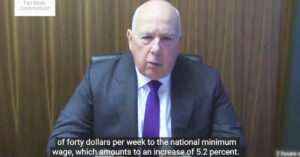 In its earlier submission to the Commission, the Federal government pushed for a 5.1 percent increase.

Prime Minister Anthony Albanese said today the wage rise will help battlers put food on the table for their families.

“When I was asked would I welcome the decision, I said absolutely. And I absolutely welcome today’s decision,” he says.

“It makes a difference to people who are struggling with the cost of living.

“The truth is that many of those people who are on the minimum wage are the heroes who saw us through the pandemic.

“These workers deserve more than our thanks, they deserve a pay rise and today they’ve got it.”

Meanwhile, Employment Minister Tony Burke said people would “see in their bank accounts what the change of government means”.

“For the first time in nearly a decade, we’ve had a government argue for a real wage increase, and now it will be delivered,” Mr Burke said.

My message to Australian families who are doing it tough is this – I'm on your side and we are working hard for you.

Unions had previously called for a 5.5 percent increase.

ATU secretary Sally McManus welcomed the wage rise “and the fact that union movement has fought so hard to achieve it”.

However, she added that workers will continue to struggle during the coming year.

“This decision is one that is reasonable and it is fair,” Ms McManus said.

“It means that for low paid workers, [they] will have a better ability to pay rent and pay for the groceries and to pay for energy bills as well.”

Unions have won a pay increase of btw 4.6-5.2% for the 2.7mil workers on minimum & award wages. If it weren’t for unions this would not have happened – join us https://t.co/yb2Rq5QSJE pic.twitter.com/HzMDrCbVqf

Pay rise ‘risk to the economy’

“It veers very much towards the upper end of range of the possible outcomes that we could have expected top have seen today. In particular, it adds very significant costs to the Australian economy and to businesses. By our calculations, this will add $7.9 billion in costs to affected businesses over the year ahead,” McKellar said.

“For years wages have been suppressed while employers have enjoyed increased productivity in addition to increased profits,” he said.

“In fact, profits are up 20 percent – therefore, any complaints from business groups are disingenuous.

“And despite the increase, workers wages will still go backwards under current and projected inflation.” 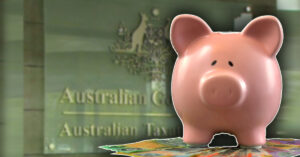 Not everyone will get the same pay rise

The 5.2 percent increase will only apply to those on the minimum wage.

The Fair Work Commission decided on a more modest 4.6 percent increase to flow through to those who work on Modern Awards.

The increase comes into effect on 1 July 2022 for most workers.

However, those who work in aviation, tourism and hospitality will have to wait until 1 October 2022 to receive the increase.

Meanwhile, comedian Tom Ballard had this suggestion – which we think has some merit!