IR Claims has filed three separate actions in the Queensland Industrial Relations Commission on behalf of Kirsten McAllister against the hospital.

The hospital suspended McAllister on full pay earlier this year.

The nurse unit manager had previously made a number of complaints about bullying by a co-worker.

McAllister claims hospital management failed to act on her complaints.

Instead, the hospital suspended her when other colleagues made separate complaints about her.

“She complained, however, management failed to act,” Miles Heffernan from IR Claims said.

“But when someone else throws her under the bus, the hospital suspends her for nine months.”

Eventually management dismissed the allegations against McAllister, however, when she returned to work, they told her she couldn’t have her old job back.

“The hospital made a grave error by suspending her in the first place, and we are calling on management to allow her to immediately return to her position as a nurse unit manager,” he said. 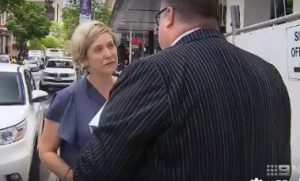 McAllister also claims the hospital failed to take action to stop a regular visitor to the hospital who had made violent threats to staff.

The visitor also allegedly administered illegal drugs to a patient known to him.

McAllister, who is represented by the Nurses’ Professional Association of Queensland is seeking compensation, and reinstatement to her former position.

“Shes not going to rest until she is reinstated as a nurse unit manager, and gets some compensation,” Mr Heffernan said.

Graeme Haycroft from the NPAQ says staff like McAllister deserve to be protected by hospital management.

“We’re looking for a change in culture, it’s not going to happen immediately, but that’s what we’re hoping to see happen,” he said.

What the hospital says

“I’ve prided myself over a long career in health in being respectful and leading by example and find these allegations against me extremely disappointing.

“Out of respect for the process I am not going to comment further on the matters before the commission.”

The Industrial Relations Commission is due to hear the case at a full trial in the new year.