A dedicated pelican feeder who only worked one hour a week has won his unfair dismissal claim and his job back after being sacked for swearing at a manager and for refusing to provide information about the sale of badges to tourists.

The Fair Work Commission found that his dismissal was without a valid reason and the employer failed to ensure procedural fairness.

Gary Matthews had worked for the San Remo Fisherman’s Co-Op in southern Victoria as a pelican feeder for about 18 years.

The co-op is involved in a range of activities in the area, including the daily feeding of pelicans and the world’s smallest penguins — both popular tourist attractions.

Mr Matthews was paid $29.00 a week for the one hour feeding sessions he would perform on a Tuesday.

He was also allowed to sell badges and collect donations to raise money for the Pelican Research Group, which promotes the welfare of pelicans in the region.

Worker refused to hand over details of badge sales

After the Department of Environment, Land, Water and Planning started making enquiries about whether the co-op was profiteering from wildlife, the co-op’s general manager, Paul Mannix, decided to stop the sale of badges and collection of donations because of the associated risks.

When he asked Mr Matthews on numerous occasions to provide details of the revenue raised from the badge sales, Matthews refused, because Mr Mannix wouldn’t tell him why he wanted the information.

At a subsequent pelican feeding session, Mr Matthews was approached by a visitor who asked him about the badges.

Mr Matthews assumed the visitor was a ‘stooge’ sent by management to set him up, and later confronted Mr Mannix.

During the heated exchange, Mr Matthews swore at his manager, using words to the effect:

“What you did was very f-cking disrespectful.”

The general manager retorted that it was:

“Effing offensive that you would make such an accusation”.

Mr Matthews was subsequently dismissed by email for the following reasons: 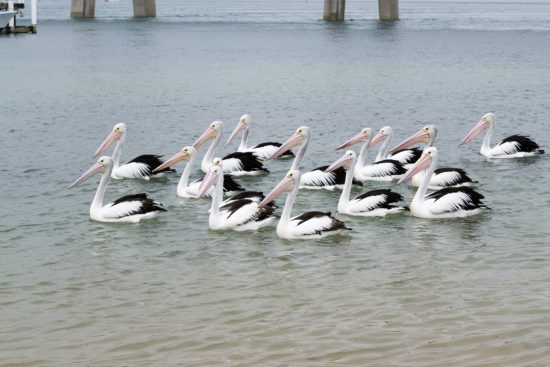 Pelicans at the San Remo Pier.

Commissioner David Gregory said he was not satisfied that any of those reasons constituted a valid reason for dismissal.

On this basis, and in addition to its finding that the employee had not been provided with any opportunity to respond to the reasons for his dismissal, the employee was found to have been unfairly dismissed.

Commissioner Gregory found it appropriate for Mr Matthews to be reinstated, noting his length of service and dedicated services to the welfare of pelicans.

He also found that the necessary trust and confidence in the employment relationship had not broken down.

Employers should always seek legal advice before dismissing an employee

Miles Heffernan, Litigation Director at Industrial Relations Claims, said the case showed everyone who is eligible to make an unfair dismissal claim can do so, no matter how many hours they work.

“Many people might think a case like this is trivial, but the job was obviously very important to this worker, even if it involved just one hour a week and he had every right to make a claim for unfair dismissal in the Fair Work Commission,” he said.

“It should be a lesson to all employers to think twice and to be very careful about how they performance manage or dismiss and employee, because if they make silly mistakes like failing to provide procedural fairness, they are going to come unstuck in the Commission.”

“If you take your time, and invest in some quality advice and get some proper guidance before you act, it will almost certainly save you time and money with an unfair dismissal claim down the track,” he said.

Forklift burnouts cost worker his job despite no procedural fairness