Industrial relations expert Miles Heffernan has described on-going cuts to penalty rates in retail, hospitality and pharmacy as nothing more than a con, because they haven’t delivered the promised jobs or economic growth.

On Sunday, the latest round of cuts took effect, with fast food and hospitality workers losing 10 per cent of their Sunday penalty rates, while retail and pharmacy workers had their rates reduced by 15 per cent.

The cuts, which were first introduced in July last year with a 5 per cent reduction, were ordered by the Fair Work Commission, which, along with business groups, argued would lead to job creation and economic growth.

Mr Heffernan, Director of Litigation at Industrial Relations Claims, said the public had been sold a pup.

“There is not one scrap of evidence anywhere that cutting someone’s wages will create one single job,” he said.

“You just need to think about it logically – the only reason a business will employ more people is if they need more people, otherwise, they won’t – they will simply pocket the penalty rate savings as profit.” 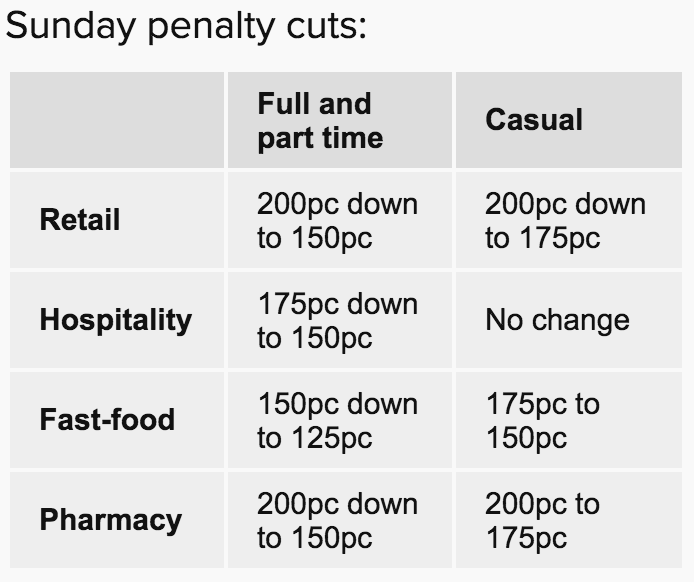 The extent of the penalty rate cuts after they are fully rolled out in 2020.

Research shows jobs have been lost since cuts first introduced

Mr Heffernan’s claims are backed by research which shows that since penalty rates were first cut last year, thousands of full-time jobs have been lost in the retail and hospitality sectors.

According to the Australian Bureau of Statistics, 50,000 full-time jobs have gone in retail, challenging the industry’s argument that a reduction in penalty rates would create more jobs and more hours of employment.

“The first reduction was only 5 per cent and there was a fairly hefty increase as well last year to the minimum wage,” he told Fairfax.

Mr Heffernan said that rather than growing the economy, cutting the wages of people on low incomes will actually shrink it.

“What we do know – what there is evidence for – is that low paid workers spend all of their income, buying petrol, groceries, shoes for the kids, paying their mobile phone bill, or maybe even ordering a takeaway pizza – that’s what makes the economy tick – but the moment you give them less to spend, the less they are going to spend, so that’s less money going into the economy,” he said.

It’s a claim supported by research released this week by the McKell Institute, which showed that since the first round of penalty rate cuts last year, consumer spending flat lined to zero percent growth, suggesting a correlation between reduced wages and reduced spending.

“Prime Minister Malcolm Turnbull used to always bang on about ‘jobs and growth’, well the evidence shows that these cuts to penalty rates have delivered neither – they don’t work, they are short sighted, and they are unfair,” Mr Heffernan said.

If you are not being paid your correct wages and entitlements, we can help.

A 7-Eleven operator has been penalised $336,000 for running an illegal cash-back scheme. This one…