A Gold Coast Pizza Hut outlet has been caught exploiting a driver through an illegal sham contracting arrangement.

The employer then created false records to cover up the wage theft.

Zhao ordered the driver, an Indian man in his 20s, to provide an ABN.

He then treated the employee as an independent contractor, instead of an employee.

As a result of the arrangement, Zhao paid the driver a flat rate of $16 an hour, instead of $20.36 for ordinary hours, and up to $40.72 for overtime and public holiday work.

The underpayments happened between November 2015 and May 2016.

Zhao also failed to pay a required per-delivery entitlement, a uniform allowance in addition to superannuation.

Zhao admitted to the sham contracting, which Judge Michael Jarrett said resulted in severe financial hardship on the driver.

“According to the evidence, he was the sole breadwinner for he and his wife and was responsible for their daily living expenses, rent, groceries, and his wife’s tuition fees.

“Partly as a result of being underpaid, he needed to borrow about $1,500 from his cousin in Melbourne and about $20,000 from his father in India, which he says was culturally shameful and embarrassing.”

“The failure to keep proper records and to provide pay slips to employees is an insidious practice that is only aggravated by the creation and provision of false documents designed to conceal the employer’s wrongdoing,” Judge Jarrett said.

“It is a much cheaper way of doing business, however, it is also illegal.

“Employers who set hours and conditions of work, and who make workers wear branded uniforms or display company logos, are engaging those workers.

“Therefore, those employers should pay proper wages and entitlements.

“In this case, it is clear the driver did not run his own food delivery business, so he should have been paid as an employee of the pizza outlet.” 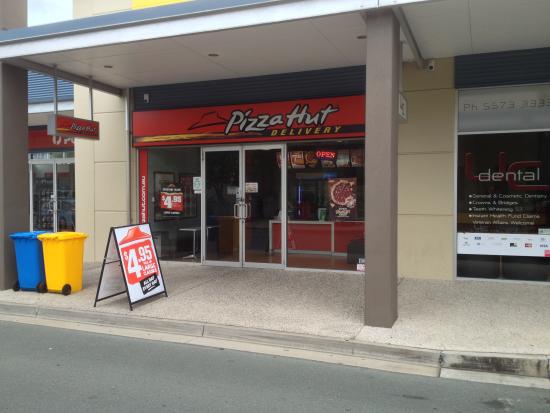 The Pizza Hut store at Upper Coomera on the Gold Coast.

As a result, four received enforceable undertakings, while inspectors issued 11 others with compliance notices.

In court, Zhao claimed to be a victim of the ‘pizza wars’ – which resulted in heavy discounting and fierce competition in the industry.

He said he hadn’t made a profit since taking over the store in 2013.