Qantas has abandoned plans to ask office staff to work for free in its Sydney terminal over the Christmas period.

Instead, the airline will pay for extra workers.

The backdown comes following a barrage of criticism from workers and also unions who accused Qantas of “Christmas wage theft“.

A recent email to head office staff asked them to volunteer to work in the terminals:

“We require volunteers to assist the self-service check in and auto bag drop area, bussing gates, concourse arrivals hall and at the transfer desk.”

The volunteer roles depended on the employee’s skill set, security requirements and preferences, according to the email.

They included handing out bottles of water and Christmas chocolates to passengers at airports, in addition to helping people find their way around the terminal.

A Qantas spokesman claimed the airline wanted to “spread a bit of Christmas cheer during a really busy period” through the volunteer program.

The spokesman denied cost-cutting was the reason for the scheme. 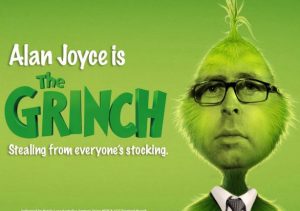 “Qantas posted over $1.6 billion in profit this year, it’s charging Christmas rates to passengers, and has the audacity to ask its lowest paid workers to work for free at Christmas.

“It’s a Grinch act of the highest order.

“Let’s be clear, this isn’t volunteering.  This is wage theft.

“But workers are being asked to choose between ‘volunteering’ for their employer or their local charity.”

Unions celebrated on social media as a result of the backdown.

Union win!@Qantas have backed down and committed to changing the Christmas ‘Volunteer’ Program. They’re even putting on extra paid staff.

Congratulations to the hard working union members at @Qantas. pic.twitter.com/K93Z0TeTE2