After being publicly outed for underpaying its workers, management at St Vincent’s Private Hospital Toowoomba has written to all staff assuring them it is committed to resolving the issue “in a timely and fair manner.”

The email comes just a day after Industrial Relations Claims launched a public campaign on social media to encourage current and former support staff to come forward to find out if they are owed unpaid wages.

“Staff may be aware of social media in connection with a current matter before the Fair Work Commission involving St Vincent’s Private Hospital Toowoomba.

Given the matter is before the Commission, it is important we respect and preserve the integrity of this process and we are therefore limited in what we can say.

However, I am concerned for staff that the information circulated by Industrial Relations Claims (IRC) is inaccurate.

The hospital also strongly disagrees with the way its position has been described in the public comments made by that firm.

I assure you, the hospital is committed to resolving this issue in a timely and fair manner for the staff concerned.

St Vincent’s Private Hospital Toowoomba has always maintained an ‘open door’ policy with staff – on any issue and in regards to any concerns.”

Miles Heffernan, Director of Litigation at Industrial Relations Claims, said he is sceptical about the assurances given in the email.

“Well they’ve been aware of the underpayments problem since March last year, and only now they want to claim they are committed to resolving it – really?” he said.

“I’m confused, because if they were genuinely committed and understood there was an underpayment problem, wouldn’t they send an email to all staff saying, ‘hey we might have a problem, come and see us’ – now that would be ‘open door’ – wouldn’t it?

“It seems you only need to go public with a Facebook marketing campaign, and all of a sudden they want to remind their staff they have an ‘open door’ policy.” 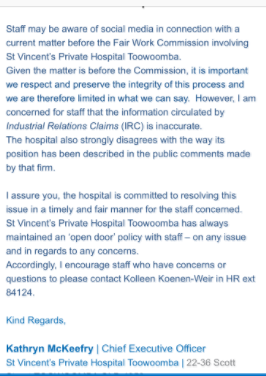 The email written to all staff at St Vincent’s.

Industrial Relations Claims is representing a number of workers and former workers of the hospital who have been underpaid wages, which according to Mr Heffernan, total around $60,000.

The payroll errors involve how breaks and overtime were calculated by the hospital, including unpaid penalties and overtime.

Mr Heffernan rejected the claims made by Ms McKeefry that the information presented by his firm was “inaccurate”.

“Interestingly, they don’t describe how it’s inaccurate, which is richer than grandma’s gravy when you consider how long it has taken to get a reasonable response out of them,” he said.

“And in response to the hospital’s claim that it “strongly disagrees with the way its position has been described in the public comments made by that firm”, Mr Heffernan said, “Again, they don’t explain how they disagree, or give a different version of events.”

St Vincent’s has now sought an urgent hearing in the Fair Work Commission.

“Well they have made an application to the Commission, and have expressly asked the Commission to hear it before the 6th of April, which ironically is the very day that we start talking to prospective clients who have worked, or do work at St Vincent’s Hospital Toowoomba.”

Mr Heffernan said despite the matters before the Commission, he still plans to go ahead with his walk-in information sessions at the Quest Toowoomba on the 6th and 7th of April.

“I believe that there are more people that we can help, and I’m committed to helping each and every person that has ever worked at St Vincent’s, and not been paid every dollar they are owed,” he said.

Industrial Relations Claims has put the call out to current and former employees of St Vincent’s.

IR Claims tells inquiry there is no excuse for wage theft