A brawl at at bubble tea shop allegedly sparked by a wage theft complaint has sparked protests in Adelaide’s Chinatown.

Workers claim businesses in the precinct exploit vulnerable migrants and international students by paying them as little as $10 an hour.

Dozens of protesters gathered outside the Fun Tea store in the CBD, where the brawl broke out two weeks ago.

The group chanted slogans like “Say no underpayment, say no to exploitation”.

Others made speeches, including Aira Firdaus from the United Workers Union.

She told the media that her hospitality employer only paid her between $8 to $10 after she migrated from Malaysia 10 years ago.

“I felt very scared and this happened to a lot of other hospitality workers as well.”

Jackie Chen from the Labour Info Hub claimed more than 100 other businesses in Chinatown pay their workers less than $15 an hour.

He said most are migrant workers who are fearful to speak out against their employers, or complain about wage theft.

“If they haven’t grown up here, or haven’t been educated in what their workplace rights are here, they might not be aware of what the minimum standards are,” he said.

“They might also not be aware that we have mechanisms here to enforce their rights.” 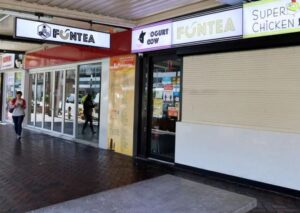 The video appears to show the 20 year-old worker confronting her boss about unpaid trial shifts she performed for the business.

Then a man in a black t-shirt, allegedly a friend of the boss, begins to argue with the worker before violently slapping her across the face.

A brawl then breaks out in the shop, during which the same young worker is kicked hard in the stomach, sending her tumbling to the floor.

She needed hospital treatment as a result.

Mr Dryley-Collins says workers have a right to ask their boss about their working conditions, including their pay and rosters.

“Any employee should be able to talk about to their boss about any parts of their employment, including how much they get paid,” he said.

“So a conversation about wages and entitlements should never end in physical violence.”

My Dryley-Collins says unpaid trials are designed to show that a worker can perform the tasks involved in a particular job, and should only last a short time,

“Unpaid trials, if they are to go ahead at all, should be at most a few hours, and never more than a day,” he said.

“In terms of unpaid work more generally, it should really only take place as part of an educational requirement.

“So for practical legal training, for example, or nurses, both enrolled and registered, have certain periods of practical placement.

“But these are directly related to their education, and to their employment once they’ve graduated.”