Wage theft is a ‘mortal sin’ according to the leader of the Catholic Church, Pope Francis.

For those not in the know – a mortal sin gets you a one-way ticket to hell.

Wage theft is a ‘mortal sin’

The pope made the comments about wage theft during a recent mass in Italy.

He read from the Letter from James in which the apostle scolds the rich, and criticises employers who withhold wages from their workers.

The pope then said that people today might think of James as a union representative, however, he quickly said they would be wrong.

Instead, he described him as an apostle adding that the Holy Spirit had inspired his words.

Even Jesus himself frowned upon wage theft, according to Francis.

“Woe to you who exploit people, who exploit labour, who pay under the table, who don’t pay pension contributions, who don’t offer vacation days. Woe to you!” Jesus is quoted as saying.

Wage theft, is like “skimming” from people’s pay packets, “is a sin, it is a sin,” the pope said.

He also said when employers fail to pay proper wages:

“This injustice is a mortal sin.  You are not in God’s grace. I’m not just saying this, Jesus says it, the apostle James says it.”

“It’s good to know the pope and Jesus hate wage theft, however, as scary as hell sounds, it’s not enough to stop greedy bosses stealing from their workers,” he said.

“We therefore need to introduce criminal penalties for wage theft, and start locking up dodgy bosses to stop them underpaying their workers.” 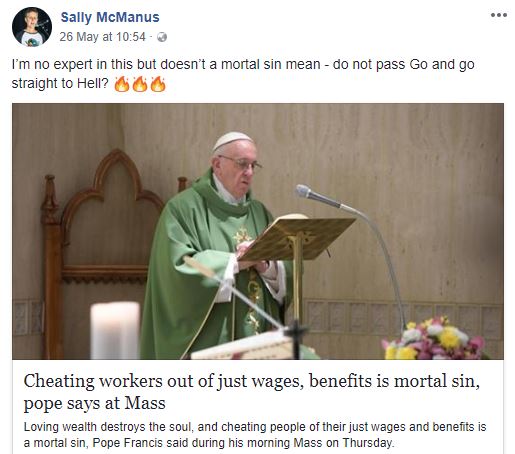 The operators of a Degani café have been penalised over $140,000 for underpaying staff. They also…