Wage theft is now a crime in Queensland after new laws passed in state parliament today.

The laws come as a result of extensive lobbying from unions and industrial advocates, including Industrial Relations Claims.

Wage theft is rampant in many industries including hospitality, fast food and retail.

It’s estimated that one in four Queensland workers is affected by wage theft, short changing them by a staggering $2.2 billion every year.

Industrial advocate Miles Heffernan from IR Claims has long called for wage theft to be made a crime.

“If a worker steals from their employer, they face a maximum 10-year jail sentence,” he said.

“We believe the same rules should apply to employers who steal from their workers.”

He recommended the state government introduce criminal penalties, along with a number of other measures.

“The federal government continues to drag its feet on this issue, so it’s heartening to see Queensland and Victoria take the initiative,” he said.

Despite endless promises from the Morrison government to also address the problem, it is yet to announce any changes. 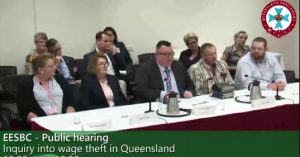 Penalties same for employers and employees

Queensland’s Industrial Relations Minister Grace Grace said under the new laws, an employer will face the same current maximum penalty for ‘stealing as a clerk or servant’, which is 10 years’ imprisonment.

It will also now be easier and quicker to recover unpaid wages.

“These new laws recognise that the current framework is not doing the job – something needs to change to stop rampant wage theft.

“Stronger penalty and deterrence measures are needed for those who commit wage theft, particularly where it is deliberate and systematic and part of an employer’s business model.”

Wage theft is a 'mortal sin' according to the leader of the Catholic Church, Pope…